Frozen shoulder is the term for a shoulder pain condition that occurs mostly in middle-aged to older people, is extremely painful and takes a long time to settle. It is also known as adhesive capsulitis although the cause and pathology is not clear. There may be little to find in the person’s medical history, examination or x-rays findings to explain their situation.

Frozen shoulder is described as primary or secondary, with primary patients having no clue as to why they have their condition. Secondary frozen shoulder sufferers can usually describe an event, which lead to their problems, such as surgery or a fall. 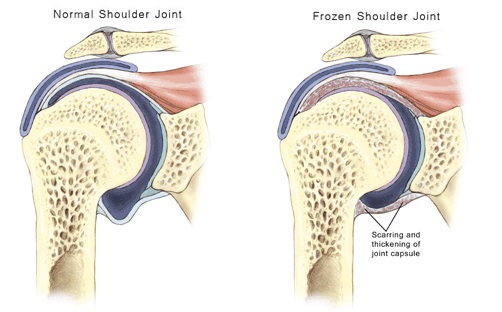 Frozen shoulder is described as being in three phases:

Who Gets Frozen Shoulder?

Most people who get frozen shoulder are typically between 40 and 60 years old and it is more common in diabetics (five times more likely) and women. The other shoulder may also be affected but that typically occurs later on rather than at the same time.

The cause of primary frozen shoulder is unknown but secondary frozen shoulder patients can usually give a history of trauma such as a fall or surgery, followed by immobilisation of the shoulder. Patients may have frozen shoulder on one side and then later on the other, but luckily very rarely both shoulders together. There appear to be many changes, involving the inflammatory and immune systems, leading to increased fibrosis of the joint lining, thickening of the ligaments and adhesions.

What Are The Symptoms Of Frozen Shoulder?

Frozen shoulder is often described as “self-limiting”, meaning that the condition will settle with time and movement will return to the shoulder. However, studies indicate that non-operative treatment can leave 10% of patients with long-term pain, shoulder stiffness and reduced shoulder function.

Physiotherapy and anti-inflammatory medication may be useful to reduce pain, increase range of movement and improve function. Physiotherapists may use joint mobilisation techniques, soft tissue work, electrotherapy and shoulder exercises.

Steroid injections may give good pain relief which can last for six weeks, although this does not seem to affect the long-term outcome. Extracorporeal shockwave therapy (ESWT) has shown some promise in giving better improvements than steroid injections without the risks.

If the patient does not improve with medication and physiotherapy then surgery may be indicated. Although manipulation under anaesthetic (MUA) has been used to treat this condition, side effects can include fracture of the humerus.

Selective arthroscopic capsular release is the recommended method for improving frozen shoulder. An arthroscope is used to minimise wound size and the stuck parts of the shoulder capsule (fibrous bag around the joint) are released by cauterisation. A nerve block is given to reduce pain and the physiotherapist then starts the patient on range of motion exercises on the same day.

The patient must put their shoulder through their full range regularly to maintain the movement gained by the operation. Healing occurs as the scar tissue contracts and this must be prevented from occurring with the shoulder by the side most of the time. Exercise must be vigorous and is often referred to as “aggressive physiotherapy” in that the joint must be pushed to its reasonable limits to keep the movement gained.

Arthroscopic capsular release followed by vigorous physiotherapy can be expected to have a good to excellent outcome in 75% to 90% of cases.