The most dramatic and public hamstring injury occurs when you see an Olympic athlete pull up suddenly in the sprint, grimacing and clutching the back of their thigh. It happens quickly and you can’t run afterwards. The Romans used to cut the hamstring tendons of prisoners because without hamstrings you can’t push against something, stopping men from using a shield effectively in battle. This is the origin of the word “hamstrung”, meaning being rendered helpless to do anything about a particular situation.

The hamstrings all start, or originate, on the ischial tuberosity in the buttock, the “seat bones”. They end (insert) around the upper fibula and tibia. The hamstrings cross two joints, the knee and the hip, making their function more complex than one-joint muscles. 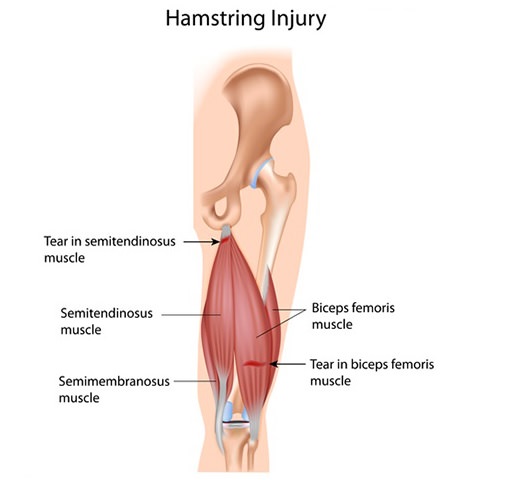 The hamstrings bend the knee (knee flexion in physio-speak) and extend the hip, i.e. move the hip backwards. They don’t do a lot of work in standing about or walking, but are very active in powerful and energetic activities such as running, pushing and jumping. Most of us don’t need strong hamstrings for the type of sedentary lives we lead, but athletes and climbers need strong and flexible hamstrings to achieve peak performance.

How Does Hamstring Injury Occur?

The hamstring is most at risk when it is under strain during “eccentric contraction” which means it is both contracting and lengthening at the same time. Lunging, jumping and running are typical activities that put an athlete at risk.

The muscle tendons can even be torn off the tuberosity (an avulsion fracture) in cases where the knee is straight and the body bent forward violently and suddenly. This can occur in water skiing.

Most hamstring injuries occur at the junction between the muscle and tendon parts of the whole structure.

Hamstring injuries are muscle strains. They occur during rapid acceleration whilst running or winding up to fast running. Factors contributing to this injury include poor warm-up, lack of flexibility, tiredness and lack of a good strength balance between the knee muscle groups.

If someone has had a hamstring strain before that makes another one more likely. Over-striding, where the athlete tries to speed up by lengthening their stride in running, is known to be a risk.

The severity of a pulled hamstring varies greatly, so treatment is dictated by the degree of the patient’s problems.

Physiotherapy is indicated for the management of hamstring injuries. A physio will treat minor injuries using the PRICE protocol, with rest, ice, compression bandages and elevation to control pain and inflammation. Active range of motion exercises may be suitable after a few days, progressing to isometric exercises with the knee in different positions.

More severe injuries may be splinted with the knee straight and crutches used to take the stress off the hamstrings in walking.

Further treatment progresses through active exercises to resisted exercises, stretching, eccentric strengthening exercises and sport-related training drills. This process is best performed under the supervision of an experienced physiotherapist.

Over the long-term, it is important to maintain flexibility and the ratio of strength between the quadriceps and hamstring muscle groups.

Surgery may be needed to clear out large haematomas (bleeds) or to repair the muscle bellies if they have been torn. If the origin of the hamstring has been avulsed (pulled off) at the base of the buttocks, then surgery may be required to reattach it.