The anterior cruciate ligament or ACL is one of the “big four” knee ligaments and stabilises the knee in complex ways. With an ACL tear a person’s knee is usually unstable in quick movements, decelerations and twisting manoeuvres.

The knee has four major ligaments to keep it stable and guide the movements it is allowed to do during normal activities. The cruciate ligaments, anterior and posterior, control forward and back movements of the knee joint and are important in the joint position sense of the knee.

The anterior cruciate ligament consists of two main bands of tissue making up a dense, strong, rounded ligament. It runs from the femur above to the tibia below. The ACL is the main restrictor of “anterior translation of the tibia” which is the tendency for the shinbone to slide forwards under the thighbone. It also contributes to control of knee rotation and sideways movement. 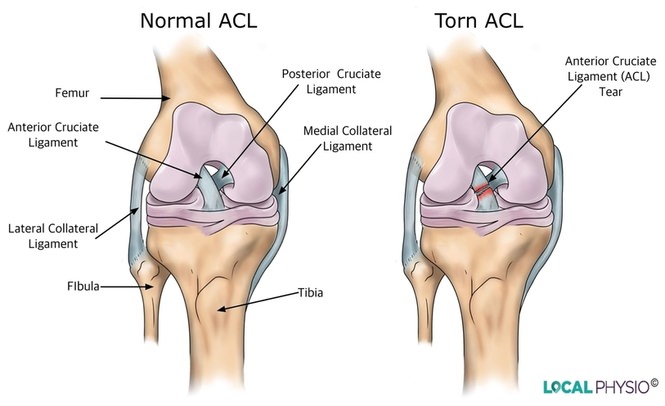 An ACL injury is often caused in low violence activities such as decelerating from speed or contact injuries where rotation is occurring in the joint at the time. Hyperextension, where the knee is forcibly over-straightened, is also liable to damage the ligament or result in a torn ACL.

Around half of people with ACL injuries also suffer from a meniscus tear at the same time, mostly of the medial meniscus.

Who Gets Anterior Cruciate Ligament Injury?

Although ACL injury can occur in many activities, the most risky activities are football, skiing and basketball. Women, although having much lower numbers, are significantly more likely to suffer ACL injury in such activities.

What Are The Consequences Of ACL Injury?

An ACL-deficient knee may have damage to the medial meniscus and the cartilage covering of the knee joint. Pain and instability (a tendency of the knee to give way under loads) can be a continuing problem. There may be an increased risk of degenerative changes over time, which had lead to anterior cruciate ligament reconstruction becoming a very popular operation.

Treatment Of An ACL Tear

An acute ACL injury is managed by a physiotherapist using the PRICE protocol. A knee brace might be necessary if the knee is unstable and crutches may be required to allow limited weight bearing on a very painful knee. Ice, a compression bandage, elevation of the leg and gentle muscle contractions will be used to settle the knee down.

Once the knee is settled and the swelling has subsided, assessment of the stability of the knee is much easier. Physio treatment of a knee with a torn ACL concentrates on developing hamstring and quadriceps strength and on restoring the joint position sense of the knee. Much of the work is done with the foot on the ground (closed kinetic chain exercises) rather than exercises such as quads bench knee extensions (open kinetic chain exercises).

ACL ruptures are not operated on in the acute stages as this increases the risk of fibrosis occurring within the joint. An avulsion fracture, where the attachment of one end of the ligament is pulled off the bone, may be operated on early to relocate the fragment.

ACL Reconstruction is typically performed later than three weeks after injury but sooner than six months as meniscal injury and poorer repair can result from too long a delay. Arthroscopic knee surgery is now the preferred method of ACL reconstruction. 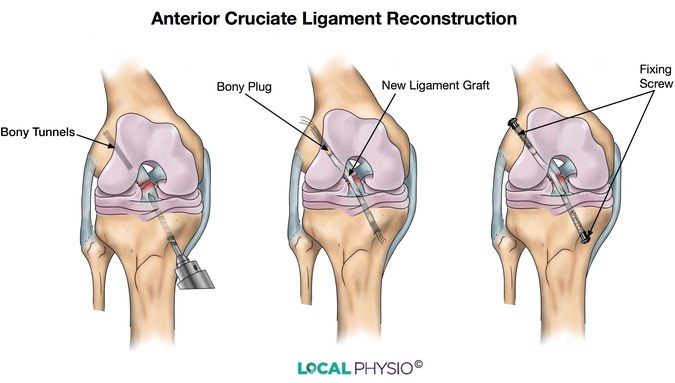 An autograft means a graft from the same person having the repair, using a part of their own body. A piece of bone is taken from the patella and from the tibial tuberosity (the large lump below the knee at the front) with part of the patellar ligament connecting the two making up the new anterior cruciate ligament once it is installed in the knee. Anterior knee pain, pain at the front of the knee associated with the patella, is a known complication in 10-40% of subjects.

HT grafts are popular as they suffer less anterior knee pain and allow faster recovery in patients. Studies have shown HT grafts have a comparable performance to BTB autografts.

Allografts are taken from someone else, typically a deceased person. While popular in the past, there have been problems with transmission of infections and potential immune problems.

Synthetic grafts have been used but problems with failure of the graft and swelling in the knee have led to their use being stopped.

Older people or those who do not stress their knees with risky sports may be managed with physiotherapy to regain full power and range of motion.

A knee brace is commonly used, for a variety of knee injuries, to limit movement to prevent damage and to stabilise the joint while healing occurs.

Specialised anterior cruciate braces may limit the unhelpful sliding of the shin bone forwards under the thigh bone (called anterior translation), at least under low loads. They may also reduce the reaction time of the hamstring muscles, which may also be a negative effect.