Carpal tunnel syndrome or CTS is a collection of signs and symptoms in the hand due to compression of one of the nerves travelling into the hand from the forearm. Carpal tunnel symptoms can include pain, numbness and pins and needles in the areas of the hand supplied by the affected nerve. Loss of strength and feeling in the hand may also be present.

The median nerve passes into the hand almost in the centre of the wrist on the palm side. At that point it is surrounded by firm structures that don’t have any give. If pressure increases in that area the nerve’s ability to transmit impulses normally can be affected and this leads to the symptoms.

The nerve can lose its insulating myelin sheath which allows it to conduct messages quickly and individual nerve fibres can also die back. The nerve fibres that control feeling are usually the first to be affected with the motor (muscle controlling) nerves next. There may also be changes in the circulation and warmth of the hand as autonomic nerve fibres are compressed. 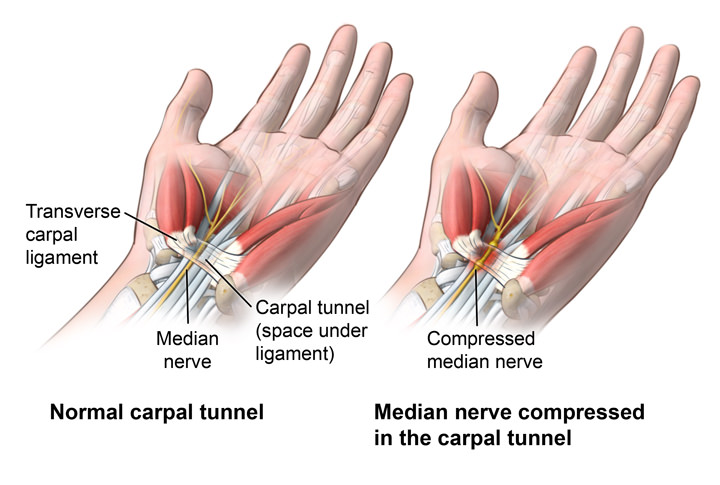 Many factors may be connected to developing CTS and they can include increasing age, increased body weight, being female, pregnancy and breastfeeding, various medical disorders, a wrist fracture and jobs involving repetitive and forceful wrist movements. Definite causing factors are often not clear.

Who Gets Carpal Tunnel?

Women get CTS at a rate of 3 to 10 times that of men and the main age range if from 45 to 60 years. It’s rare in younger people. If untreated the median nerve can be damaged and hand function significantly reduced. It is more common in white people, diabetics, people with thyroid problems, after wrist fracture or injury, RA, in activities with vibration and in pregnancy and breastfeeding periods.

Blood tests are not useful for CTS, unless the doctor is looking for other conditions that might be relevant, such as diabetes or thyroid problems. MRI scanning and ultrasound are used but the most useful test is electrophysiology. This measures how close to normal the nerve transmission is and can indicate the severity of the problem and help monitor any change after treatment.