We can’t predict who will be affected by spinal stenosis apart from, as it is due to ageing, that it will occur in older patients. Preventing this condition occurring is also not possible, it is either going to occur or it’s not.

The spinal canal is a narrow, cylindrical space that runs from the base of the brain down to the sacrum. It carries the spinal cord nerves and there are numerous exits on each side of the spine, bony tunnels through which smaller nerves run to get out into the limbs and trunk.

This narrow canal can be affected by something that narrows it further and significant narrowing can have effects on the nerves within the canal, in some cases giving pain and other symptoms.

Stenosis means narrowing. Some people have a naturally narrow spinal canal, which is called congenital stenosis. This may make spinal stenosis more likely to give trouble when they are older. Most people get acquired stenosis, as changes in the spinal structures around the canal gradually compromise the space within.

Narrowing can be progressive or come on more quickly as an acute disc prolapse obstructs an already narrowed canal space. Stenosis makes it more likely that an acute injury to the spine will result in nerve damage.

The commonest areas for spinal stenosis are in the cervical spine and the lumbar spine. Spinal stenosis makes a neurological injury more likely should the person have an accident such as a bad fall.

The Changes Occurring In Spinal Stenosis

With use and ageing, the structures that make up the spine, the bones, discs, joints and nerves all change and this is known as spondylosis. Some of these changes can begin to narrow the canal and this is commonly due to:

The Types of Spinal Stenosis

It’s important to get the diagnosis of stenosis correct because the choices of treatment and surgical options depend on this.

There are two main types:

Symptoms and Signs of Spinal Stenosis

Most people who go to the doctor with spinal stenosis are complaining of chronic, i.e. long-term pain. If the symptoms are more severe they may report loss of feeling in parts of the legs and muscle weakness.

In lumbar stenosis, degenerative changes compromise the space in the spinal canal. The individual disc segments move abnormally, causing bony outgrowths to form, further cutting into the free space of the canal. The vertebral bones, less stable due to the loss of disc space, can move out of alignment either forwards or backwards, again limiting the spinal canal diameter. This is called spondylolisthesis and often does not give symptoms in itself. 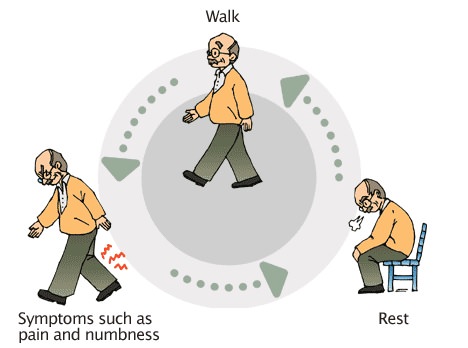 Patients with lumbar stenosis are typically worse standing and walking and better sitting. Sitting allows the spinal canal to adopt a position with more space so pressure on the nerves is relieved. Weakness, pain and numbness while walking is thought to be a result of poor blood supply to the spinal cord due to the stenosis. This is known as neurogenic claudication or NC.

In neurogenic claudication, the leg nerves don’t get enough blood supply when a person with spinal stenosis is walking. This results in pain, weakness and loss of feeling in the legs. NC is worse walking downhill (the back is arched) and leaning back. It is better in lying, sitting down, squatting down and bending forward, such as leaning on a wall, when about three-quarters of the pain may be relieved.

In normal spinal canals extending the back (arching) reduces the size of the canal by 9%, but in stenotic canals, this can be up to 67%. The narrower the canal is, the worse the effect of spinal extension in narrowing that canal further. Sitting and bending forward allows the spinal canal to increase its diameter and relieves symptoms to some degree.

Patients typically then sit down or lean forward on an object. Leg symptoms affect around 90% of people with stenosis and patients commonly report tingling and numbness.

It’s important to distinguish NC from vascular claudication, where the limitation of blood supply is due to disease in the blood vessels and not nerve compression. These two conditions may occur together as they are common in elderly people. People with vascular claudication are worse in an activity that requires more blood to the muscles of the legs but it doesn’t matter what position the spine is in. So bicycling and walking uphill will be a problem, which are not usually troublesome in NC.

The treatment for these two types of claudication is different so it’s important to be sure of the diagnosis, for which a doctor should be consulted.

How Many People Have Spinal Stenosis?

Around one out of 1000 people present with spinal stenosis, rising to around five of every 1000 of people over 50 years of age. It is the leading diagnosis for people over 65 who undergo spinal surgery. Around 8-11% of these have lateral canal stenosis with sciatica-like leg pain. Most people over 60 years old have some spinal stenosis but only a small number have symptoms for which they seek help.

Although many people have symptoms they can cope with, spinal stenosis can have more important effects. Loss of muscle power and long-term pain can result from lumbar or cervical stenosis.

Abnormal movement in the spine due to severe degeneration of a spinal segment can lead to loss of function due to compression on the spinal cord.

Many people with lumbar stenosis improve in terms of pain and functional ability or remain without much change. One study showed that 70% of patients with moderate stenosis didn’t change over four years, with a further 15% better and 15% worse. About one-third of patients had walking levels unchanged, one-third were better and one-third were worse.

People with severe pain, myelopathy, claudication and loss of nerve function are suitable for spinal decompression or laminectomy. In some cases, a lumbar or cervical fusion is suggested, although this is controversial.

Conservative treatment includes physiotherapy, bracing, postural change and drugs. A recent study has shown improvements but little difference between physiotherapy and surgery after two years in those with moderate stenosis. Patient education can teach sufferers to avoid back extension (leaning back) and walking downhill, as this decreases the diameter of the spinal canal further. A physiotherapy guided exercise programme including aerobic conditioning, strengthening exercises and flexibility is worth a trial.

If the signs and symptoms indicate spinal stenosis and the imaging, such as MRI scanning, also indicates stenosis then surgery is an option. The main reasons a spinal surgeon might operate are:

Predicting who will do well is not clear. People with very severe degenerative changes on their spinal x-rays may not need surgery or if they do, they may do well afterwards. Patients often feel improvement over the following four years, although a recent study has shown that by eight years the difference between surgery and physiotherapy is not noticeable.

The decision to operate on people with severe lumbar stenosis is relatively straightforward. Even in moderate stenosis, there is some functional improvement after surgery so a surgeon and patient may decide this is worthwhile. Fusion of one or more spinal levels due to degenerative changes is more complex and controversial.

Length of stay in a hospital for spinal stenosis surgery is around two to five days, with patients ideally having a physiotherapy designed exercise plan before surgery that they can continue afterwards. Being active physically to recover functional ability as much as possible is the key goal.