Dupuytren’s Disease, also called Dupuytren’s Contracture, is a condition of the hand, which results in the fingers being pulled down towards the palm. This makes it harder and harder to straighten the fingers and reduces hand function. It is classified as a fibrosing disorder, the tightening process occurring in the fibrous tissues of the palm.

The knuckle joints of the fingers are mainly affected but the first finger joints can be also, with the ring and little fingers most commonly involved. 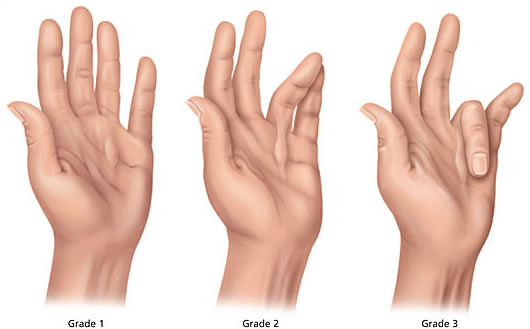 Who Gets Dupuytren’s Contracture?

Dupuytren’s contracture is most common in Caucasian peoples of European origin, with an estimate of 4-6% of adults affected. Around half of cases have both sides involved with the right side most often affected in cases of one side only. The ring finger is most commonly involved followed by the little and middle fingers. Men are three times more likely to have this condition than women and it is rare in people under 40 years of age.

Risk factors for Dupuytren’s contracture include hand trauma, vibration in manual work, alcoholism, diabetes and other conditions, but it is not clear how important these factors may be. A family history may also be important.

The Stages of Dupuytren’s Contracture

Dupuytren’s Disease is not always progressive and may remain at an acceptable level without change.

Patients usually note a thickened nodule in the palm, which may have been there for years and slowly increased in size. As the disease progresses the fingers are pulled down into the palm, the ring being the first in most cases. Tenderness and pain can be reported by often the condition is painless. Once the fingers are pulled down the person cannot get them straight and may have trouble doing normal activities such as holding things or typing.

Mild or non-progressive cases can be monitored over time with measurements taken as a baseline each time.

Physiotherapy may be useful in the early stages of the condition. Stretching, range of motion exercises and wearing a custom made splint are typical approaches.

Injections of a number of drugs have been used, the most researched and successful being CCH (Collagenase Clostridium histolyticum).

Surgery includes a variety of approaches from cutting the bands using a needle introduced through the skin (fasciotomy) to open removal of the abnormal fibrous tissue from the hand (fasciectomy). The hand is typically immobilised in a splint dressing, time is allowed for initial healing, then re-splinting of the hand is performed to prevent the fingers from drawing down again.

Surgery may be performed relatively early, as any contracture of the first finger joint itself is associated with a poorer outcome. So if this begins to develop then treatment needs to occur promptly.

Specialist physiotherapists and occupational therapists may also have a large role in rehabilitation after surgery, looking after the wounds, making splints, giving scar massage, stretches and exercises.